“This is a once-in-a-generation, major infrastructure project” That was a sentence recently used by the CER/CRU Commissioner Aoife MacEvilly, but sadly she wasn’t talking about the Infrastructure for Electric Vehicles which will form part of the biggest change in energy consumption in the coming years. She was instead referring to the planned rollout of smart metering which will cost €1.2 Billion by the time it is completed in 2024 and each Electricity customer will pay for that over the next 20 years.

The CER who were recently renamed to CRU state one of their strategic goals to be “public are protected by ensuring consumer prices for energy and water are fair and reasonable” and “Our aim is to protect the interests of energy customers”.

So now think about the changes coming in the transport industry, the strive to cut our Carbon footprint and the Government targets:

Given the move away from Diesel which has begun across Europe especially along with pledges by many Car Manufactures you would think these targets make sense and the Government is serious about moving to Electric Vehicles (EV’s).

Now as someone who owned an Electric Car for over 2 years I know the many positives that EVs can deliver but sadly the Governments targets seem a far fetched dream, the issues seen by EV owners are causing some like me to ditch EV and move back to Petrol or Diesel however the bigger issue is that these issues are deterring new car buyers from buying an EV.

Those issues include poor resale values of vehicles due to evolving battery size and technology along with range anxiety, especially in older models. 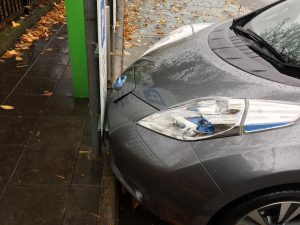 In 2014 when I was looking at purchasing my Electric Car the ESB ECars website stated “When the IT and payment system is up and running you will have access to an online account which will enable drivers to pay for public charging. Through this account, you will be able to choose an energy supplier pre-pay using your debit or credit card and check your current balance. The system will be able to recall your normal charging pattern and let you know, via your mobile phone, when you need to top-up. Users will be able to see the best current online electricity tariff and change energy supplier at any time with no penalty.”

The use of public chargers has been free of charge, however in late 2015 a leaked leaflet showed that ESB ECars were going to start charging fees for not only using the chargers but also for access to the chargers. See my post from November 2015 http://www.oreilly.ie/esb-ecar-charging-plans/ which has all the details. The planned costs were based on time connected to charger rather than units consumed which many of us in the EV Community saw as loophole to allow them to charge for electricity without being regulated.

In short their plans were put on hold when the then CER said they were going to undertake a review of the pilot project and open a public consultation, which they did and their consultation document provided 4 options:

One of the issues raised in the document was that of who the final customer for Electric Vehicle Charging points is, the act which details this was obviously put in place before EV charging points were envisaged:

The Act defines supply as:

“…supply through electric lines to final customers for consumption”

And a final customer as:

And a single premises as:

Full document is available at https://www.cru.ie/wp-content/uploads/2016/07/CER16286-Consultation-Paper-re-the-ESBN-Electric-Vehicle-Pilot-Ownership-of-the-Assets.pdf

The CER/CRU have now released the outcome of that process and have decided that this means the operator of the chargers and not actually the Vehicle owner using the charger is the final customer which means the electricity sold is unregulated and not part of the CER/CRU remit!

I should point out that the Public Chargers did not require planning permission as they are not considered a building or structure by ESB ECars and local authorities!

The published Decision paper is available at https://www.cru.ie/wp-content/uploads/2017/10/CRU17283-Decision-paper-on-ESBN-Electric-Vehicle-Pilot-Associated-Assets.pdf and contains a lot of details but in summary it states:

“The CRU remains of its position that the infrastructure should not be added to the ESBN RAB and the assets should either be sold or maintained by ESBN on a commercial basis.3 Given the current financial value of the EV assets is likely minimal, the CRU considers that, at the current time, the assets should remain in ESBN’s ownership for a transitional period. Moreover, the CRU has decided that there will be no further funding of the assets through network charges (DUoS). Therefore any further funding required would have to come from other sources such as, for example, subsidies or from fees recovered from the users of EVs.”

“The CRU cannot impose costs on electricity customers to cross-subsidise the transport sector. Funding will have to come from other sources such as, for example subsidies, equity investment from other parties, or from fees recovered from the users of EVs.”

So basically the current mess is that the CER/CRU have just announced is that they will not add Public EV Charging Points to RAB and allow funding under DUoS and the final customer of the infrastructure is not the actual user. They simply state that current infrastructure should be adequately operated and maintained.

So the current infrastructure which suffers from failed units on a regular basis, many black spots for chargers and many Fast Charging units only suitable for certain vehicle types is not going to see any investment any time soon!

Sadly I can only summarise that while smart metering will see an investment of €1.2 billion in the coming years the likely investment in Electric Vehicle Public charging points looks very bleak and given the low number of fully Electric Cars in Ireland currently, up to September this year over 123,000 vehicles were sold and only 579 or 0.5% of those were fully electric!!, I can’t see this mess helping to improve the sales and start some real moves towards Government targets.